We launched the system to at least 2,000 employees (1/8 of the total PH population) last October 7 so I had to stay home for weekend support in case the system decides it wants to cause us a little panic and headache after all the testing we did prior implementation. Thankfully, the system is behaving until now (knock on wood). Either nobody has used it yet or the system can be left on its own now. I prefer the later. Let’s see once the next pay period comes close when people start cramming for correction of schedules and punches.

And because I am expected to stay at home last weekend, I decided to visit the dermatologist for warts removal hehehe. The procedure was a little painful and smelly (hello burned skin). It lasted for almost 2 hours for the face, neck and chest area. And you cannot wet the affected areas for 24 hours. You also have to avoid fish, chicken and eggs. Since she mentioned fish, maybe everything seafood is also included. Ok. No skin care products except for the post warts cream (which doesn’t smell good haha) for at least 2 to 3 days. Tiis ganda talaga besh. But I also cannot ignore the wart that decided to grow in my eyelid. Medyo irritating sya at baka mas lalong lumaki so pinatanggal ko na lang. It’s also advisable din daw to have diamond peel after. Ok…

So what else is there to do if you can’t go malling? Watch KDrama! I started watching Love in the Moonlight hehe. Di naman lamay levels. I am disciplining myself to not watch until the wee hours of the morning. Until 12AM lang ang cut-off ko. 1AM, max na yun. I’ll finish by next weekend hehe. 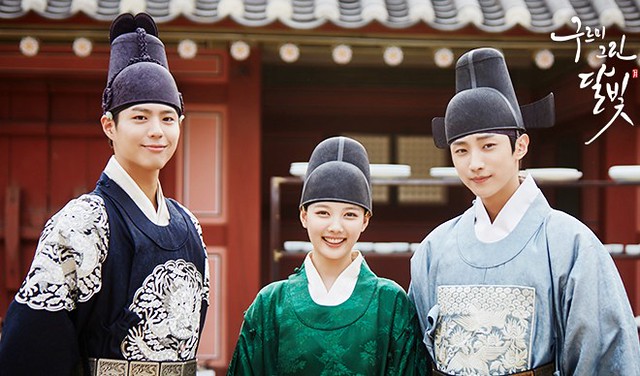 ↑Image from here. Kilig much! Hihihi!