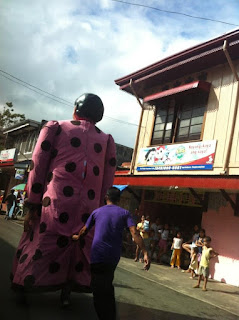 Aside from Tatlong Krus, there are also lots of wood shops and art galleries in the area which you can visit if you want to stay longer in the area. Some friends were able to buy stuff which they say are much cheaper there as compared to the malls in Manila.
You can also visit Paete Church which is located in the plaza. Paete Church is also known as St. James the Apostle Church, originally built in 1646.
It was the Feast of the Sto. Nino so the atmosphere was festive. We were even able to watch the parade at around 4 PM. Tatay, the owner of Capati Kainan was hospitable enough to let us stay in his resto so that we can watch inside without getting wet.  It’s a tradition to spray people in red with water that day. As per Tatay, when you are wearing red, it means you are participating in the tradition of getting wet.  One friend enjoyed spraying the people in the parade when the shop owner passed her the hose haha.
Still feeling adventurous, we decided to return to Manila via Rizal, again only with the Caliraya map hehe. It’s not as confusing as we thought. You’ll not get lost as long as you know which town/barangay comes one after the other. It’s even faster because there are lesser vehicles on the road. And the view is amazing. Mostly, you’ll be passing by fields and mountains until you reach Rizal/Antipolo area. However, some parts of the road are winding so people not used to it may get a little dizzy. As always, we had a blast!