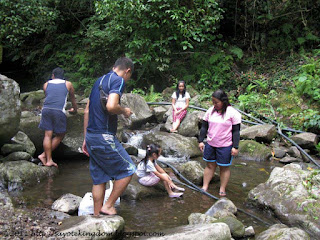 ** This was written sometime in May, right after this trip. **

It’s my friend’s birthday this 19th of May so to celebrate, we headed to Quezon province last May 14-15. Our itinerary was to have a picnic at Yapak ni Hesus on the 14th, spend the night at her aunt’s place then proceed to Tayabas, Quezon for another picnic on the 15th. However, everyone was more interested in going to the beach so we went to Kwebang Lampas in Brgy. Polo instead of Tayabas River.
I was also with my other friend and 2 nieces (a 7 year old and a 14 year old) on this trip. We met with the gang at around 5 AM and proceeded directly to SLEX where we met up with the rest of the group. We brought private cars by the way. We did not commute. We were supposed to drop by Shell SLEX for breakfast and to buy our lunch from KFC but we missed the right turn. Assuming that there’s also a KFC in Petron, we proceeded there. Unfortunately, no KFC so we just had a quick breakfast at McDo then resumed our travel, now in search for a KFC. We did not find any so we ended up buying chicken from Andoks instead. Not KFC but still chicken :). We also dropped by the market to buy some mangoes and have a CR break.
We arrived at Mang Domeng’s place at around 10AM. After changing into our swimming attires and rechecking items to be brought to the river, we started the trek going to our spot, the mini-falls (mini to me at least :)). It takes around 30 minutes to reach the place. It’s a combination of river trekking and land trekking (if the way is the land beside the river). When we reached our spot, everyone was already hungry so forget 12 PM, we were already having lunch by 11 AM LOL. After a hearty meal, the others went down to the falls while my nieces and I and some friends stayed at the shallower part of the river. The stones were slippery. Maybe because it was not yet raining often during that time so the muds are not yet washed out.
At 3PM, it was time to head back to Mang Domeng’s for wash up. On our way back, the others, including my older niece, entered the cave. At the cave, there’s a pool of water where the local believe to be miraculous. During the first time I was there, Mang Domeng poured water unto our heads while we say our wishes. True or not, it doesn’t hurt to wish right? 🙂
At around 6PM, we were already on our way to Pagbilao, Quezon to my friend’s relatives’ home where we’ll be having dinner and spending the night as well. Other friends and Pastour Emata (yes, the Filipino M.t Everest summiteer) met us there as well. They had prior appointments so they were not able to join us in Yapak ni Jesus and opted to just follow.
Our hosts prepared delish dishes for us! My friend’s cousin’s specialty was . it was with cheese! Would you believe that? A viand with cheese! 🙂 But then again, I love anything cheesy so I may be biased a bit but everyone said it was yummy as well so I was not the only one captivated by it :D. The other dish that struck me was . it was shrimp with grated coconut, wrapped in banana leaves and steamed to perfection. Home cooked food is and will always be glorious :).
Of course after that sumptuous dinner was socials-stories, laughter, jokes- over a bottle of beer and of course endless picture taking. We called it a night at 1AM and proceeded to our designated sleeping quarters for a much needed rest.
Me and my nieces 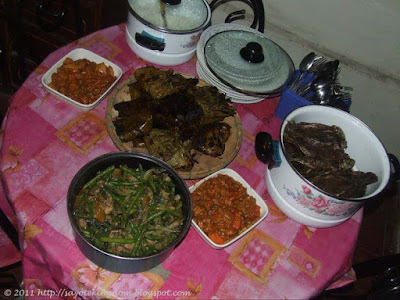