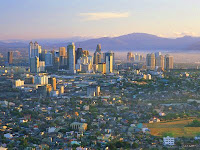 Yes, wish granted. Pasig has adopted me. It will be my new home starting later today, August 8, 2010 until destiny takes me to another place :). When our team transferred to the OSMA site and I considered moving to a new apartment that’s nearer work, I have always wanted to rent a place in San Antonio Village. However, the rents were way out of my budget. So I postponed transferring to look for other places but none of the apartments I visited captured my heart. Yes, I am that way. I should fall in love with the place before I can say this is it. “Pwede na rin” was never my basis when it comes to places I choose to live in. Anyway, fortunately, the apartment I visited last May decreased its rental for 1K when I inquired again 2 weeks ago. I visited the place and I was able to choose a unit that’s calling my name. So there, later, it’s goodbye Quezon City :).

And I can’t understand where all my stuff came from that it took us forever to sort out and pack all things. Grrr. I think I’ve been collecting or keeping stuff that I don’t really need. Will have check on all my things again and discard everything that I don’t need. Thanks to my brother and sister who helped me pack and who will be accompanying me with the transfer as well.

I’ll miss Quezon City which has been my home for the past two years but I’m also looking forward to living in Pasig.

Oh, downside by the way is that I won’t be having internet for the next month (only, I hope) as I still need to process the transfer. No cable as well. Hopefully for this, it will be faster though. Oh well. I wish, I wish, I wish :).

Ok, time to rest these tired muscles to have energy again later for the actual transfer.

*Credits to the owner of the image.*