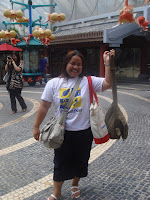 In our recent trip to HK, we had to do a lot of walking. On the average, we were walking for at least 13 hours a day for 4 straight days. I’ve already removed the hours spent on sitting while we are having our meals or while in transit. Yes, that’s how energetic and diligent we were that we are out for at least 16 hours a day hehehe. Adik? No, we were just so excited and amazed that’s all. Come to think of it, those walks are even longer than all the walking I do when I go to th boondocks.

The trade-off however was a super tired feet at the end of the day. Perhaps that’s the reason why there were a lot of people offering massages everywhere even in the middle of the night. We didn’t get one though because aside from it being expensive, we were wary hahaha. And so, I went home with aching feet and bad news is until now, the pain hasn’t gone away, whereas for my friends, their feet are back to normal.

Last weekend, I had to do some walking again as I am looking for a new place that’s nearer the office. Come Monday, I’ve felt the same pain I felt during the last 2 days of our HK trip. I decided to just have it checked at Pain and Rehab Megamall. Just after describing the situation, the doctor said it’s plantar fasciitis. Gah. Big term for me. But according to my research, it’s an irritation and swelling of the thick tissue on the bottom of the foot. The doctor said I have a mild case but I’ll still need to undergo therapy for at least a month. The therapy includes applying gel in my soles and they have a machine that spreads(?) the gel for my feet to absorb. Afterwhich, I also have several stretching excercises. I was also prescribed to buy heel caps, which I haven’t bought until now.

Given this, I am restricted to run/jog/do strenuous walking until my feet is not better. Otherwise, I’m risking myself to a more sever case. Ugh. No, thanks so I’ll behave for now :D.

Interestingly, while I was doing my research, I came across the following articles about flip flops and its relation to foot pain. Errr. Ok, I’m guily, I was in flip flops all those time except for that one day that I wore my rubber shoes just to put it to use and not waste my effort in bringing it with me :p. Hoookeeeeyyy…now I know. Now I want new rubber shoes :p. And I’m definitely buying the heel caps too.