After a hearty breakfast at the hotel, we immediately proceeded to our itinerary for the day.

This is a concrete highway built along the coastal area of Pasaleng Bay. As per other sites, this was constructed to answer the landslide problems in the area. Now, it’s one of the tourist attractions in Ilocos Norte. 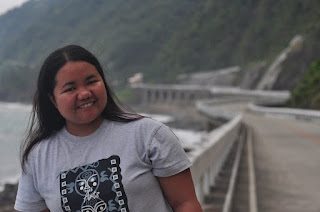 We made a quick stop to buy the necessary supplies for our lunch. For our group, we just bought liempo, pork chop, and tilapia which we later asked the locals at the beach to grill for us.
Blue Lagoon
This is not the famous Pagudpod beach but it’s one of the many resorts in Pagudpod. The waves were strong so we opted not to swim. Instead we had photo ops and played a little with the waves reaching the shore. There were a lot of people today maybe because it’s Holy week and most people are off from work.
Bangui Windmills
Breathtaking site! Amazing technology. And oh, one of our travel companions works for the company who built the windmills hehe. We had more fun here playing with the waves. We met another couple who gladly took group pictures of us while jumping in the waves. Fun! Fun! Fun!

We arrived here just before sunset. Unfortunately, the way to the tower was already closed. Perhaps it’s for security reasons. You only have to climb a few steps before reaching the tower so it’s not very tiring. Once on top, you’ll have a spectacular view of mountains and seas, with the wind blowing gently. Perfect way to end the day.

The lighthouse was our last stop for the day. We went back to the hotel after for dinner and socials. For the second time, the singing group serenaded us again. 🙂
Expenses (Php):