I’m a finisher at this run! Yifee!

I, together with other Outdoor members registered. I signed up for 5K.

With less than three hours of sleep (I know…I should be getting more before a run :p), it was a miracle that I was fully awake when my alarm rang at 3:40 AM. Anne’s picking me up at SITC at 4:40 AM so I got ready right away. When I called Anne at around 4:20 AM, she just woke up. OMG! Hehehe. But I was not panicking yet since the 5K run starts at 6 AM so even if we meet at 5 AM, we are still on time. By 5:15 AM, I was already at 7-11 Q. Ave. and a few minutes later, Anne arrived. Mira and her daughter Claire are already with her. We also picked up EdChi at Petron Santolan then off we went to McKinley.

Unfortunately, we took the wrong lane along EDSA and we were forced to pass by Ayala Ilalim. My gulay wahahaha. We then decided to just go on a right turn at Evangelista then to South Super Highway so that we can go back to EDSA via Magallanes. For the second time, we took the wrong exit to EDSA because we were back on the other side of South Super Highway waaaaaa. Ok ok. We can just turn right at Pasong Tamo and then off to Arnaiz. But lo and behold! We missed the street wahahaha. Ampness. It was already 20 minutes to 6 AM and we were all starting to get pressured. Good thing there’s still Dela Rosa so off we went. We made a right turn to Pasong Tamo then left at Arnaiz until we reached EDSA. Whew. We were back on track. Good thing that at McKinley, there were security personnel who showed us the way to the parking lot.

When we arrived at the starting line, the 5K race already started for 9 minutes huhu. After having our numbers checked, off we went. I ran continuously for I guess 1 KM when suddenly, I started to feel cramps on my right foot. Huhu. Ok, this is what I get for not preparing for the run. I did not even do any stretching ahihi. So there, I’m suffering the consequences. I decided to walk for a while until the pain subsides a little. Unfortunately, it was not getting better so I just pushed myself to interchange running and brisk walking. After barely passing the 2KM mark, I got a side stitch! Weh! Anove! Tsk. Tsk. I still pushed while praying fervently that I will be spared with injuries and promising that I should do stretches first in my succeeding runs hehehe. I was ecstatic when I saw the 3KM mark. It means I’m in the right track and I’m nearing the finish line hihihi. So there, sprinting and walking I went, while occasionally singing Let the Pain Remain wahahaha. Why that song? I don’t know as well hahaha.

There were photographers all over the place so every time I pass by one, I just smile whether or not he’s taking my picture ahihi. Just in case lang :p.

After running/walking for almost an hour, I reached the finish line. Yifffee! A lady took the number on my bib. Hopefully this time, I’ll be included in the online race results ahihi. There was also an official photographer at the end of the line so I gave my best smile when he took my picture wahahaha. Adik.

Good thing I bumped into Mira and EdChi. They finished earlier. While they went to the PhotoVendo line, I went straight to the Freebees line to get mine. We were given a loot bag (I haven’t checked the full contents yet but I saw an alcohol, cotton, face towel, juice and some flyers), a bottle of Rush and mineral water. I heard there were bananas but I wasn’t able to find one anymore. I was already starving ahihi. Next, I went to get my certificate then joined the others in the PhotoVendo line. Anne and Glen were already with Mira and EdChi. After we had our pictures taken and printed (yes, they were giving a printed photo for all…cool!), we went straight to Mcdo for breakfast. 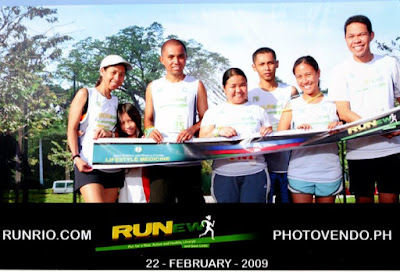 There you go. Until my next run! Teehee!