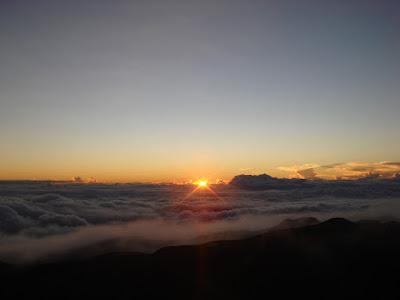 Another early wake up call at 4 AM to get ready for the summit assault. By 4:30 AM, we were already on our way. I think we had to walk for another 30-45 minutes in order to reach the summit. I was all covered (sando, shirt, sweater and a jacket) so that when I had my warm up walk, it was getting harder for me to breath because it felt so hot. To remedy that, I just removed my sweater and my jacket. What a relief hehe. It was drizzling when we reached the summit. I was already in a panic because I can’t take good pictures. All my shots had drizzle in it huhu. When our group was complete, we offered a short prayer. I was really praying hard that we be able to see the sunrise. I heard from another colleague that after being in Mt. Pulag for more than 10 times, he was only able to witness the sunrise 3 times. Weh! Anyway, after a few minutes, the drizzling stopped! Yippee! So we just waited in anticipation for the sunrise. And while doing that, we had shots of the cloud formations BELOW us. Yes, we were looking down at clouds! This time, I really was on top of the world hehehe. It was really, really amazing. Few minutes before 6 AM, the sun started to rise. Wuhhhuuuu! Everyone got excited and everyone just wanted to have the best pictures hehehe. Mga adik. But who won’t be? It was so very beautiful that you just want to capture all the perfect moments. Good thing I had some good shots. Thanks Sony and thanks buddy hehe.

We also inducted some of the applicants here. There were I guess 5 of them. Our graduation for BMC was supposed to be on the summit too but we were not complete so we’ll just do that some other time.

Much as we wanted to stay longer in the summit, we can’t for long. By 7:30, we headed back to the camp for breakfast and break camp. By 9:35 AM, our group was ready to leave camp so we went ahead. This time, we are going back via the Ambangeg trail. It was easier. We were running in some parts of the trail thus, we were way ahead the others already. We also passed by Camp 2 (Ambangeg campsite). After more than 3 hours of walking, we reached the Ranger station. Our ride was already there waiting for us. We did not have lunch along the way. It was just all trail food. By the time we were all complete, we just loaded our things in the jeep and continued on to DENR where we will be having our much needed bath. The group just decided to have lunch/dinner along the way.

Upon reaching DENR at around 4 PM, and while waiting for the bathrooms to become available, some of us went to look for food hehehe. Don’t blame us. :p We were so hungry already. There was also a shop here where you can buy souvenir shirts. Unfortunately, they don’t have my size so I was not able to buy one. Olats.

By 6 PM, we were back in the jeep. Everybody was looking forward to dinner, wherever that is hehe. Good thing that after only an hour, we reached the restaurant. Ayos. We had to be quick though. After dinner and yosi break for others, we resumed our travel so that by 9 PM, we were already at Victory Liner terminal. We were lucky to have the 9:30 PM schedule. We were 2.5 hours late based on our itinerary hehe. Huwell.

Right now, we’re on our way back to Manila already. Thank you Father for taking care of us in this adventure. It was fun fun fun! Your creation is really amazing. 🙂