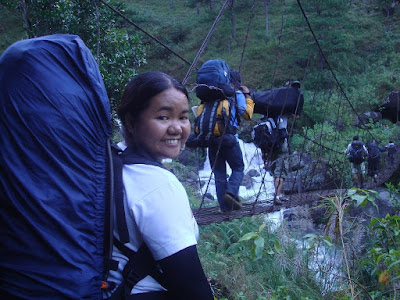 We had to wake up at 4 AM this morning so that we can have an early start. After a short breakfast, we packed up and prepared for another long trek. Our group was still the sweeper so we were the last to leave again at 7:30 AM. We had to cross a hanging bridge that was quite long. It was a little scary because the current in the river is strong. Imagine if you fell from the bridge hehe. After the bridge, it was already an assault. Good thing it was cool so it was easier to walk. But still, it was all assault huhu. After 3 hours, we reached Marlboro Country. It was called as such because of the view. You are surrounded by mountains and trees. What a beautiful view. We had our early lunch here. We also had a lot of those jump shots. I was able to master the timing of my camera (and 2 others) in order to capture the perfect jump shots hehe. Our group resumed our trek at 1 PM. After 40 minutes, we already reached the mossy forest. It’s called mossy because the trees in the area are covered with mosses. After another 40 minutes, we reached the last water source. This is where we also reached the other groups who were already having their snacks. After a short rest, we had to resume our trek, else, we will reach the summit by night time. Though tired, we still pushed ourselves. Unfortunately for me, I was stupid not to eat anything during the break and so 5 minutes after the trek, I was trembling with hunger. My buddy and I had to stop several times for me to eat. Weh! But thanks to jelly sticks, cloud 9, and water, I regained my strength hehe.

We reached the grassland at around 3:45 PM. Whew! As per itinerary, this is the last part of the leg and we are only 30 minutes away from the saddle camp! Can’t wait! It was hotter in this area because there were no trees to provide shade. It was just a steep mountain covered with grass. Good thing that it was already getting late in the afternoon so the sun was not that hot. At this point, I was beginning to feel that I was already on top of the world. 🙂

After a few more pushes, we already reached the camp! Yiffee! Unfortunately, just after a few minutes, it rained. It was not that strong but strong enough to get us drenched. We had to set up our tents quickly. Our other companions were still on the trail when it rained. Good thing everyone was able to reach the campsite safe and sound. My teammates can’t stand the cold so I just volunteered to do the cooking for dinner. I think it got to as low as 8 degrees Celsius. And since it rained and it got dark right away, we were not able to assault the summit for the sunset. Huwell.

It was mostly assault today. It was tiring but all worth it. And we were not able to follow our itinerary, yet again ahihi. I can’t wait for tomorrow’s sunrise. I hope we’ll be able to witness it. It will be another early day. So, for now, I’m signing off. Good night world!