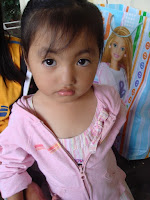 Today is the 4th birthday of my niece Velmarie, my younger sister’s daughter and the youngest at the moment among my nephews and nieces. I hope she grows up to be a good girl with moral values and confidence to live her life to the fullest.

When she was younger, she frequently has fever, cough and colds. At one point, she even had to stay at the hospital for one night. It was scary. My mom can’t stand it so she asked me to accompany my sister. I was scared as well but there’s no room for that, otherwise, my already worried sister might also break down. Good thing my niece (sa pinsan) works in the hospital and she was able to guide us with what to do, where to pay and all that stuff.

Looking at her now, I guess there’s nothing to be worried about because she seems to be growing up just fine. She knows how to listen and bear in mind and heart what we teach her. She may have tantrums at times but still, she’s more behaved than other kids I have seen. One time, she accidentally stepped on my feet and my immediate reaction was to say “aray”. After a while, I heard her say “churi”. I could not get it at first but her mommy said that’s sorry. I was very touched and speechless so I just hugged her. At another time, my sister and I were fooling around. At one point I said to my sister “buwisit ka!” and my niece, in her soft voice said to me, “bad dayta” (that’s bad). I was pleasantly surprised to hear her say that, and of course, I affirmed that what I said was really bad and she shouldn’t follow it. So I have to be careful with my words next time hehehe. Though she’s still a kid, she can still say right to my face if I’m saying bad things hehehe. I’m not offended. In fact, I’m glad to see her that way! 🙂

When I’m at home, she’s the one who wakes me up or calls me during meal times (when I’m in the bedroom bumming hehe). I’d hear footsteps in the stairs while shouting “Tita Mal-lynnnnn”. Sometimes, instead of calling me, she would lie down beside me and ask endless questions or pretend to also read. When I’m not sleeping, either we are watching TV or going to the store to stuff ourselves with junk food hehe. Bad me!

When she learned to talk, her phrases were constructed opposite of the normal structure. She would say “siyak kayat” (ako gusto) instead of “kayat ko” (gusto ko) or “siyak mangan” (ako kain) instead of “manganak” (kain ako). We would always laugh about it but sometimes, I have to follow her way of speaking for her to understand me hehe.

Sometimes, I forget that she’s already not in diapers so I still call her baby. But she would patiently tell me that she’s not a baby anymore. She says she’s already a child (ubing) so I should stop calling her a baby. When she tells me that, I would sometimes tease her that if she’s not anymore a baby, then she’s already baket (old woman) but she would say no. She’s just ubing but not baket. Hehe, arte nya!

Velmarie, happy happy birthday! Grow up to be a good girl and always remember that we love you. God bless you.