Yesterday, I was meeting some ex-/officemates-turned-friends in Makati. All I know was that someone’s treating us to dinner. 🙂 I thought it was just going to be the usual group but to my pleasant surprise, V and F were there as well! Yippee! I haven’t seen V for more than a year now. When he resigned, he was assigned in the US after a few months. He came back in June but we haven’t heard from him so I assumed he doesn’t want to see us. :p Hehe, just kidding! F is already in Singapore. He went home for a vacation last January and we went out to dinner. I just heard from another friend (who also works in the same company where F is) that he’s also coming home for a vacation again. But then, I did not expect to see him this time because he did not say anything about coming home. Oh well, I’m just so glad to see them all. 🙂 So happy happy!
Dinner was at Dencio’s Paseo Center. We didn’t have many pictures because no one brought a camera so we just had to make do with Eden’s phone camera. Hay, lesson learned. I’ll just bring my camera for any gatherings just to be sure it’s properly documented hehe. Adik! 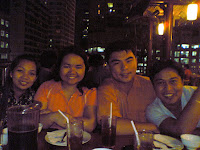 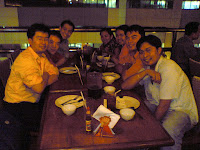