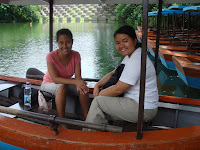 Work has been giving us headache and too much stress lately so to unwind, Anne and I decided to go on a nature trip to La Mesa Eco Park in Quezon City last Saturday, April 28, 2007

We planned to meet at McDo Quezon Ave. at the early hour of 8 AM but due to our usual office schedule which ends late at night, we were late as usual. :p Anyway, after a healthy breakfast and some grocery shopping for snacks at Hi-Top, off we went for another road trip. Following our map and after a few wrong turns, we finally reached our destination at approximately 11:20 AM. First stop was at the ticket booth where we paid for our entrance fee, then bought tickets for the 30-minute boat ride at the Superferry Boating Lagoon. Our boat’s name is Camiguin and we were the first boaters J. I was expecting for a boatman to accompany us but to my surprise, it was us who should do all the rowing. Hesitant and at the same time excited, we got on board. The person in charge was kind enough to give us instructions on how to row and also took a picture of us. Since we were not really experts in rowing, the first few minutes were a mess. At times I became confused with the backward-forward thing so we were always heading in the wrong direction. We were laughing so hard at our silliness which made rowing harder hehe. But we learned to master it and we were able to enjoy the serenity of the lagoon. Rowing is tiring but it sure is a good exercise.

After freshening up, we went down the road to check out on the other facilities and activity areas. We passed by the pool but we were not able to see it entirely because the perimeter was covered with plants and trees. We also passed by the Lopez Picnic Grounds then the Ipil Grove Pavilion. Farther down the road is the Shell Flower Terraces. I was really excited to see this area as I wanted to take pictures of all the different flowers in bloom and I was not disappointed. After a few pictures, we took the 116 steps (Yeah right! I counted the steps :p) that led to the top of the terrace where we get to see the La Mesa Dam. What a sight! But picture and video taking was not allowed. We decided to rest for a while under a big flowering tree at the Shell Flower Terraces to avoid the heat of the sun. While resting, we were also busy shooing away the ants that kept on crawling on us hehe. Next stop was at the Petron Amphitheater, an auditorium in the middle of the park wide enough for groups to conduct activities. After a few minutes of rest, we continued on to the Butterfly Trail and Hatchery. Sadly, we were able to see only few butterflies. The Butterfly Trail and Hatchery was the last on the trail.

On our way back, we followed another trail that led to the Petron Fitness Trail. There were more than 15 exercise equipments that can be used. We tried on the Monkey bars (where I was super stretched because of the wide spacing of the bars) , wood lift, rope climb and another one but I forgot the name. Each equipment comes with an instruction. What a cool area.

Last stop was at the Fishing area. We did not fish though. We just borrowed a fishing rod from a good fellow for props in our picture taking hihi.

On the way back to the parking area, we bought some cool refreshments to quench our thirst. The sun was terribly hot that day but we did not mind at all as there was still the cool breeze of the wind from time to time and the parts of the trail is covered with trees that provide shade.
Of course this trip would not be complete without Sony moments J (my camera’s Sony so I’ll not use Kodak :p). It was well documented with 140 amazing shots and 3 videos. San ka pa whewhe! 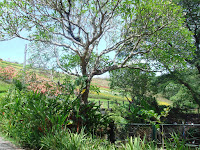 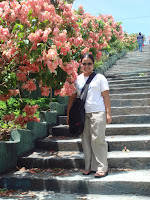 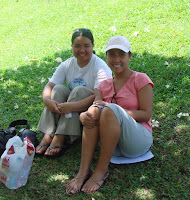