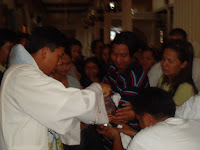 It was Joe Benj’s (who happens to be my 6th godchild) christening last April 14, 2007 so Joey invited us to celebrate with them in Tarlac. Thanks to Anne’s Innover and her passion for driving, we did not have to commute. Her passengers this time were: Jason, Jem, Weng, Fides and me.

Meeting time was supposed to be 1 PM at SM North but as always, Anne’s passengers were late hehe. We left Manila at around 2:20 PM, hoping that we’ll make it to the 4 PM event. We were lucky traffic was not too heavy so after a long drive, with a call to Joey and Jerome every now and then for the right directions, we were able to reach Liezl’s family’s residence at 4:04PM, just in time for the christening! Whew! I was relieved hehe. Tita and Ron had to follow later because they still had to fetch Pey who’s coming home from Japan. Jerome brought his own car and driver (tsotsalan! :p) so he was the first to arrive in Tarlac.

After the baptismal rites and some picture taking, we went back to Liezl’s place where dinner was served. The food was sumptuous and so yummy! Lutong-bahay eh :). r group (Sykes and former Sykes peeps) had a great time exchanging stories. At around 7 PM, Jerome, Jason, Weng and Fides bade goodbye and went back to Manila, while the rest of us stayed for the night. Joey reserved a house for us in a resort near their place. When PBB airtime was already near, Anne and I begged the others to go to the resort where there’s TV. After some more convincing, the guys finally gave in hehe. Hey, it’s eviction night and I was so excited to see Dionne out that night :p (but unfortunately, it was Zeke :(). Upon arrival at the resort, we went directly to where the TV is. After the show, we went back to the nipa hut where the guys are and bonded with them. When exhaustion has taken it’s toll on all of us, we finally bade goodnight in the wee hours of the morning.

Early the following morning, Anne and I got ready for our trip to Manaoag. The rest, except for Tita, were still sleeping when we left. Aided with a map prepared by Pey and Joey the previous night, we hit the road again. We stopped by Luisita for a coffee at Starbucks and a quick breakfast at Jolibee. Along the way, we found out that there were places Pey failed to put in the map hehe. We finally reached Our Lady of Manaoag a little late for the 10 AM mass. We heard mass, received the priest’s blessing (with holy water), took pictures in between masses, prayed some more then we were on the road again, back to Manila this time.

It was a tiring but fun weekend spent with some of the most important people in my life. I cannot ask for more. 🙂 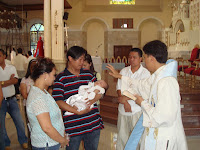 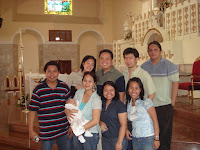 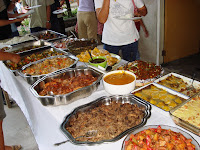 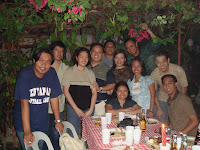 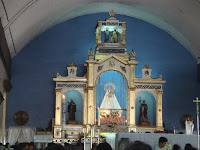